This page is under construction

Furniture for the house All joints except the bridle joints at the tops of the legs are wedged M&T. The quarter sawn board I had set aside for the tops turned out to be wee bit smaller than I thought and so as not to mix grain, I turned a problem into a feature and fitted small sections with spaces between and so managed to make both tops from the one board.

The inner section is hinged by the bolts you can see and there is a stop inside one of the larger section's legs to hold it when folded so that you can lift the whole thing without the inner section dropping through. What happened to 2013 ?
I moved house and had no workshop for a while.

As regards woodwork, the second half of 2013 and much of 2014 was mainly spent setting up the workshop at rue Darnet, adding to the kitchen and installing a second shower room. All useful stuff, but hardly furniture !!

2012 - A three leg table with turned legs in oak and a contrasting top in ash. This was made to place drinks etc in front of the sofa in Isabelle's flat and 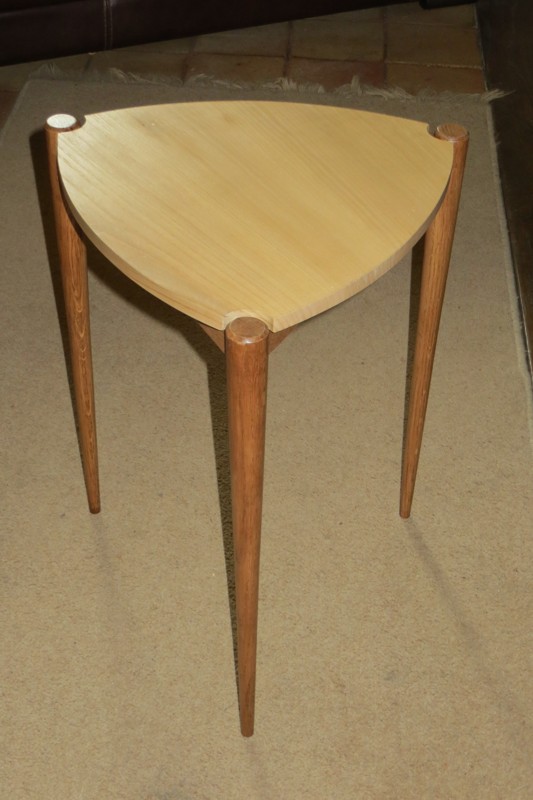 needed to be light so that it could be moved with one hand. Joinery is M&T, but with no tenon shoulders to avoid the problem of mating shoulders to the round legs. The mortices were routed.
The legs were made using Peter Livesley's lathe with lots of help and guidance - and were the first thing I had turned.

2012 - A small desk for the window alcove at Le Gravier, hence the restricted size. It is now in my office at Rue Darnet. The style was chosen to match the small cabinet that dates from 2007 as it was to be in the same room. 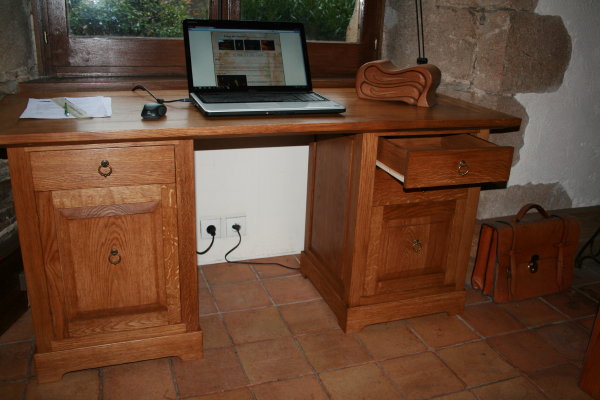 All in oak, with a mitred frame and inset panel for the top. The panel is flush and glued at the front to direct expansion to the back where there is a gap to allow for it.

The drawers are on metal slides for practicality, and the right hand pedestal contains a proper filing drawer for suspended files. The left hand pedestal has a single drawer above a cupboard with an office furniture multi-drawer stack for paper and envelopes etc. hidden inside.

2011 - A prototype chair, which was to have been part of a set of six for the dining table in our lounge. 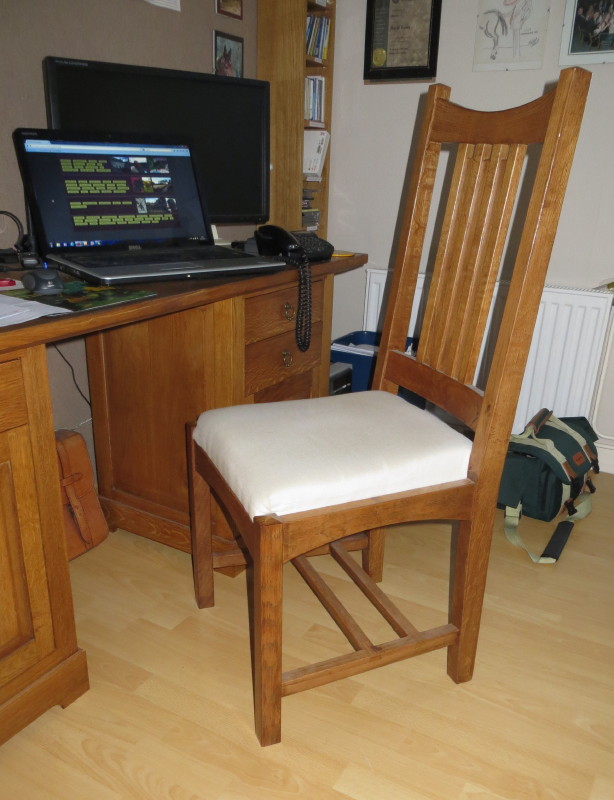 It is a loose copy of a design by Kevin Rodel published in FWW some years ago. All in oak, with loose tenon joinery and an unusual back splat design which attracted me to it in the first place.
I had a few hiccups with the complex double angled joinery, but got there in the end. In the event, the set was overtaken by events and the one chair is now used at my desk in the office. 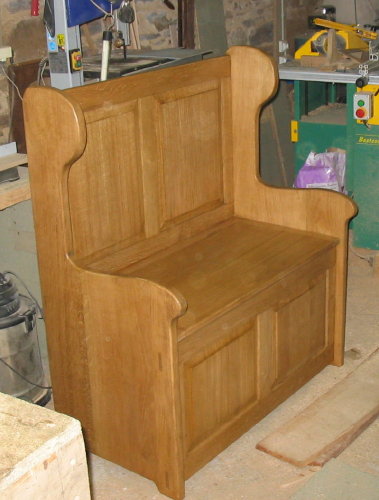 2010 - A settle made to fit a specific space in the kitchen. Construction is solid oak with floating raised panels in quarter sawn oak for visible ray fleck and wedged through tenons linking the cross members into the end panels.
The seat is hinged, but not supported by the hinges, there are blocks to take the weight at the back when the seat is closed.

The back and the bottom panels are ship lapped oak, resawn from the same boards as the rest of the construction. 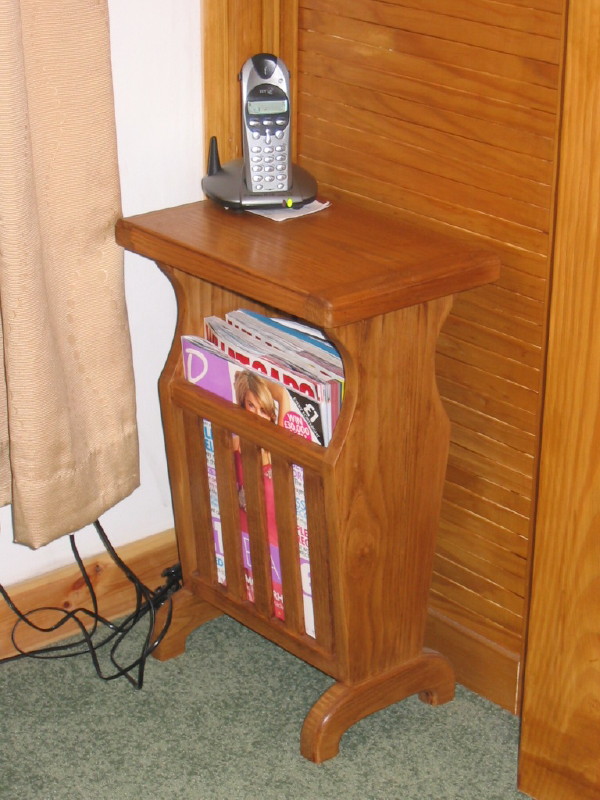 2009 - A small magazine rack and telephone table combined, in oak. Finish was polyurethane varnish for robustness.
Since UK and US magazines are different sizes, the width corresponds to the US (wider) size and the height to the UK (taller) size. 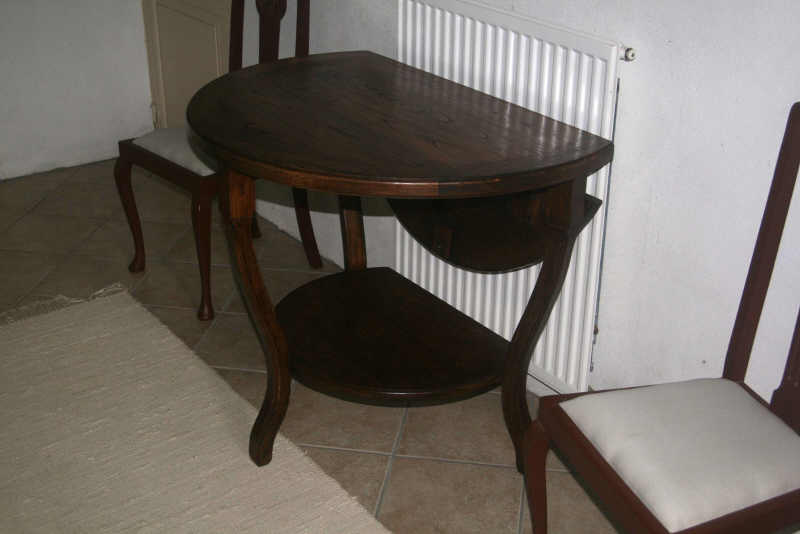 2007 - The brief for this chestnut table was to sit against a wall in our guest suite at Le Gravier taking up minimum width and to provide space for two people to eat breakfast but with the capacity to be extended for four people when needed. I decided to use three legs, so that two people can sit comfortably at 45° to the wall without a leg in front of them. The hinged top (shop made hinges) is supported by a sliding rail when opened. 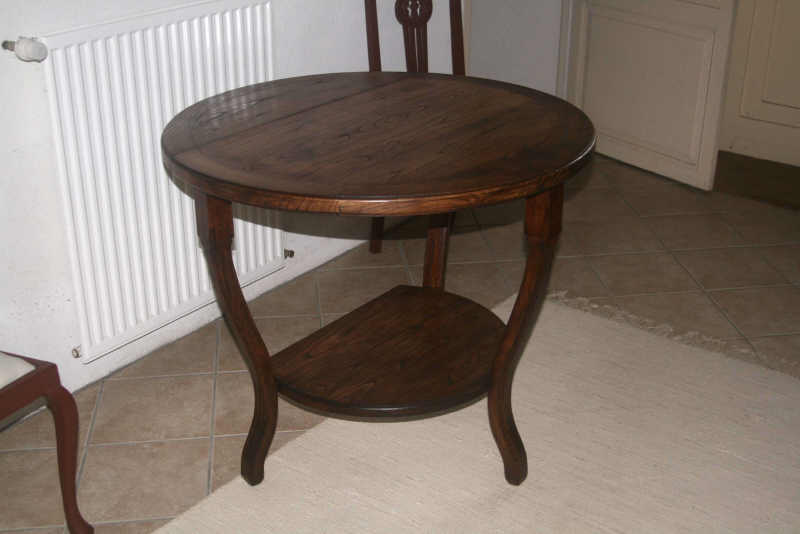 The top is constructed like a wheel using angled, pinned, M&T with a flush floating panel. Finish is oil based stain and wax.

The curved legs were the first thing I made on the new spindle moulder.

It is now used as a side table in the dining room at rue Darnet. 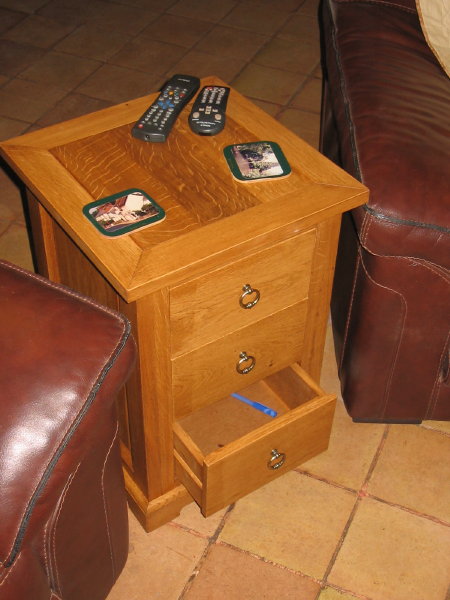 2007 - This solid oak cabinet was made to sit between sofa and chair to support drinks, books etc. There are 3 drawers, one each plus one for the telly remotes etc., plus a magazine rack on the other side. The top is constructed using mitred M&T with a flush (quarter sawn) floating panel. 2009 - A keepsake box in cherry with a lid made from several species of timber, all grown and felled on our land. It contains oak, ash, alder, chestnut, beech, hornbeam and cherry.
The box carcase is in cherry with mitred corners and wrap around grain made by resawing and book matching the boards. Apologies for the poor quality photos, taken in my former workshop.

2008 - A bandsawn box in oak, drawers lined with felt and a reproduction of a Shaker clock from around 1850.

2008 - A little box in oak to hold a standard size carton of tissues. It has wrap around grain and the grain on the lid is cut on the diagonal.
I made a number of these in different styles as Christmas presents, this one stayed with us.
The one below is in cherry.

Bigger things such as doors and windows

2011 - The first of several windows (and the window cill) for the restoration of my former early 17th century home. These were made in oak to mimic traditional designs but featured modern draught proofing and double glazing etc.
In France, windows open inwards, this is very sensible as it simplifies cleaning (and painting) on upper floors, protects kids playing outside from knocking themselves out on open ground floor windows and eliminates clutter on window cills !
HOWEVER - it makes the construction a lot more complicated to deal with rain water run off. In effect, they are made like doors, with channels to handle the water and weather boards at the bottom.

The closure is the classic french surface mounted "cremone" which has not really changed in 200yrs+ because it is simple, works well by fixing the window at top and bottom and is decorative. Here I cleaned up and re-used the original fitting.
This window is around 1m30 high, and yes, the walls were 80cm thick !
Here is the frame of one of the biggest I made to show the size - I'm 1m88 (6'2") tall. I must have checked the measurements 10 times as I could not believe the aperture in the wall was so big !

2007 - A bridge over the mill stream at my former home. The previous temporary structure had become unsafe - this is all in oak, supported by steel salvaged from a lorry chassis. The span is around 5m.

2006 - The upstairs hallway at my former home, this was essentially derelict when we bought the house, open to the roof with ivy growing down the walls !

The built in cupboard on the left, the doors and the deep skirting boards (which cover central heating pipes) are all in chestnut.

The window, not visible in this photo, is in oak like the one above.