A bit of history

I have embarked on a VERY long term project - restoring a little town house. There is a double interest here, one is simply to make some of my savings (essentially earning nothing at the bank) work a bit by buying/restoring/letting the property, but at a second level, the land belonging to the house adjoins our garden at the rear and overlooks our rear courtyard, so I've had my eye on the land for some time. The house is located in a street at right angles to ours, so it is not actually next door, but because of the corner, the two plots meet at the ends.

The owner inhertited it from his grand parents and had vague plans to do it up, but it has not been touched in over 10 years, so I thought he might be open to an offer. I contacted him as it was not on the market (no agents fees) and in the end I got it for next to nothing. Given the low price and with me doing a lot of the work, it should be quite a profitable project. It has to be a rental as reselling other than main residence attracts punitive capital gains tax here.

We completed the purchase in mid july 2015, then it was holidays, so not a lot happened untill the autumn except for removing the fences (which were on our land) and arranging better access.

It has stood empty for 10yrs or more, so nothing left of any value inside, kitchen and bathroom are both "rip out and burn". Wiring and plumbing are rudimentary to say the least, but it is on mains drainage. The roof needs attention, basic timbers (some old oak, some replacement sawn timber) seem sound, tiles and laths are shot, so are windows and doors. However, the walls are solid, 18th C stone built - basically, I'm buying a plot of land and a shell - the rest is to do.

Isabelle thinks I'm crazy - I'm retired and have no need to do any of this, but I do like to have a project...

What we started with... 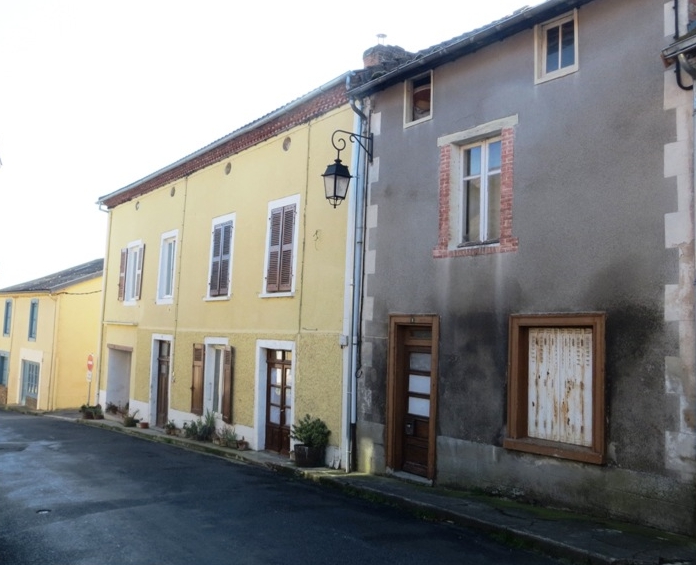 It's the scruffy one on the right. Left and below is the back view, seen from our courtyard. As you can see, the land rises sharply, our courtyard is 4m lower than the garden of the house to restore. You can see how it overlooks us and why I was so keen to get hold of it before someone else did.

Quite small (appx 650ft2), and very scruffy at present, but, done up, it would make a good "first home" let for a young couple or a single person. Also, just integrating the part of the garden that overlooks our courtyard with our existing garden will add more than the purchase price to the value of our main property. 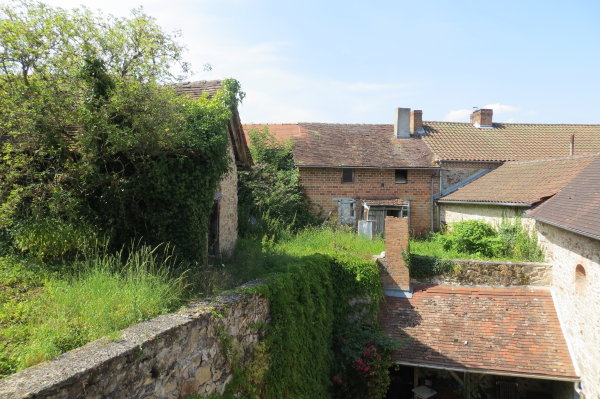 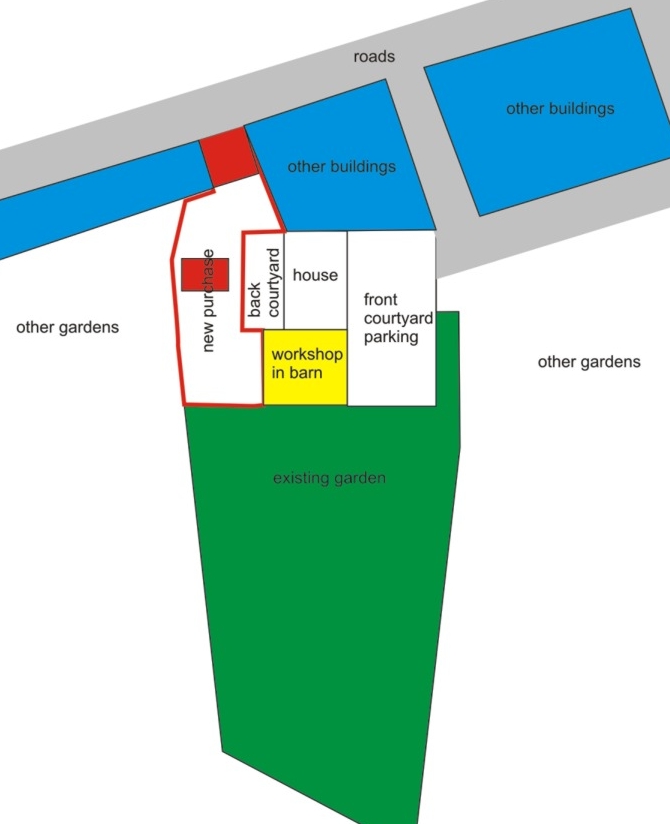 Here's how it ties into our main house : 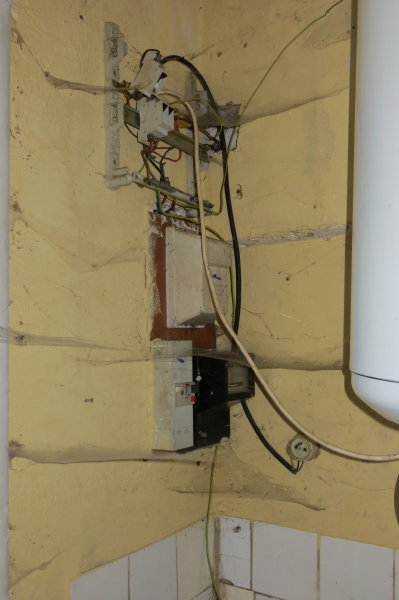 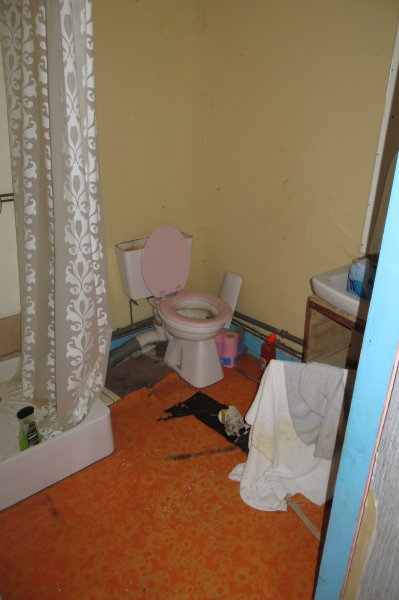 The inside is a mess to say the least :
Here is the electrical installation and the bathroom and below is the kitchen. 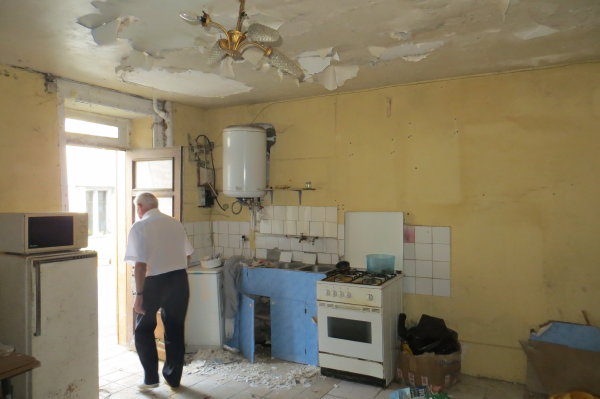 The property had been unoccupied for over 10yrs and the garden was a complete wilderness, so the first step was to clear a way to the door...

Initially tried to attack it with a brush cutter with a blade, but soon found it was littered with rubbish including junk metal and concrete rubble which is not good for the blade, so reverted to working by hand with a billhook. 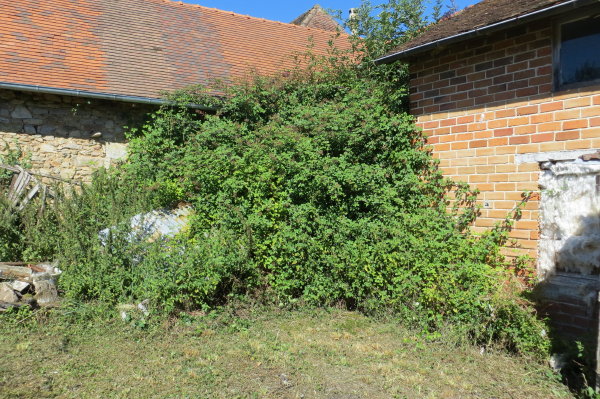 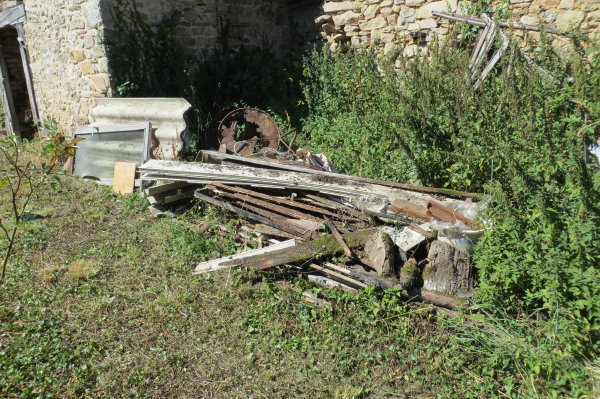 Three trailer loads of rubbish later and we can get to the door ! 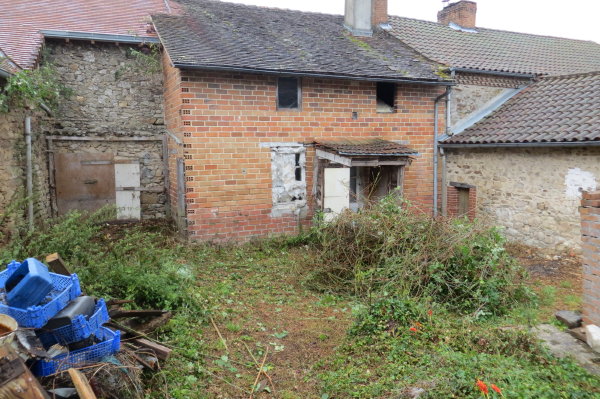 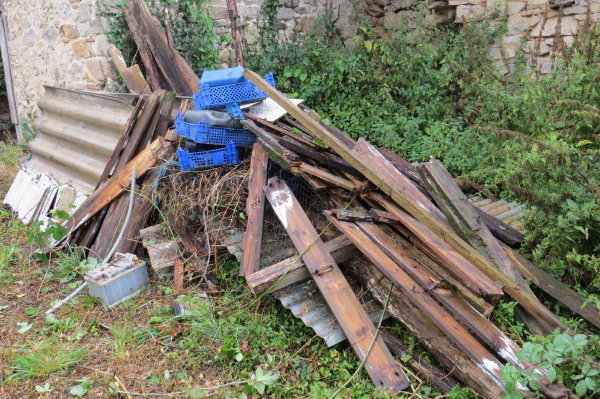 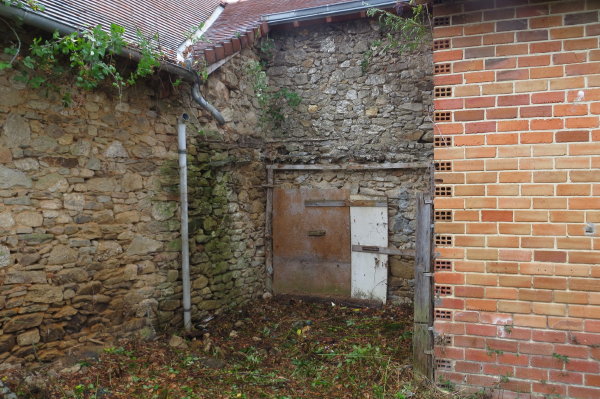 ...at which point we discovered the guttering from the neighbours roof was disconnected from the drain and discharging onto the ground by the wall - no wonder it's damp in the lower floor. Hasty repair made.

Explanation : the part of the building that you see in these pictures is the first floor. The "ground" floor is at street level, but due to the steep hill, it is below ground at the back, so the back wall of the ground floor is in contact with the garden soil and drainage is critical. All the houses in this area of the town are built like this. Once access was possible, I started clearing the inside. No pictures as I was wearing as near as I could get to a "noddy" suit and big rubber gloves. To give you an idea, the fridge still had food in it 10yrs after the last occupant did a runner (or died of food poisoning ?).

A dozen or so big dustbin bags for the small stuff, mainly cigarette packets, beer cans, asprin packets and puzzle magazines all scattered in corners and under furniture - piled a foot deep under the bed for example. Then help from Isabelle's son Jean-Baptiste to move the bigger stuff such as fridge, cooker and a few bits of damaged furniture. All taken to the tip. The sole survivors are an almost new washing machine which we transferred to a safe place and a large solid oak sideboard in quite good condition (but very ugly) that I cant decide what to do with...

It is clear that the roof will have to be redone.  The tiles are better than we had imagined, but the laths are rotten due to someone having put insulation right up to them in the roof space and so cutting off the free movement of air.  As at the end of 2015 I have two quotes for the roof and am awaiting a third - possibly the most interesting as it is from the next door neighbour who is a roofer...

Back to top of page

The address of the house is 9, rue 11 novembre, the street name is quite common in french towns as it commemorates the date of the signing of the surrender of Germany at the end of WW1. Also celebrated in the UK of course as remembrance day, 11th november.

During WW1 France suffered over 6,000,000 casualties (roughly double that of the UK and british empire combined), of which more than 1,3 million dead, someone from almost every family, in many cases all the adult male members.

It is fitting that the street name serves as a reminder.